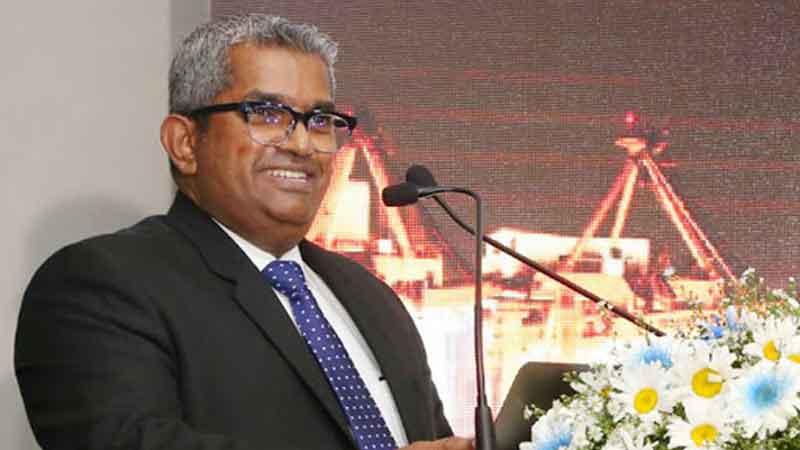 Exports had been moving as usual until the second week of March before public holidays were declared and even, thereafter, during the lockdown amidst restrictions to movement, said Chairman, Exporters Association of Sri Lanka, Ceylon Chamber of Commerce and Hayleys PLC Group Shipping Department Director Chrisso de Mel elaborating the current status of exports and the strategies needed to recoup and revive the industry.

However, he said some exporters mainly from the apparel sector were informed by their buyers not to ship and thereby had to shut down operations indefinitely.

"We have repeatedly stressed the need to have a clear structure in place with one head responsible to drive the economic vision of the government. This person should only be answerable to the president or the prime minister.

"All line ministries in charge of finance, international trade, shipping, industries and commerce and the heads of key government institutions that come under them must all be accountable to this officer who needs to be held responsible to develop, facilitate, and regulate (if the need be), but avoid the present status quo where institutions are working in silos with different objectives and agendas," de Mel said.

Exporters have also pointed out, according de Mel, the need to facilitate, in the form of convenience of obtaining curfew passes and clear instructions cutting through the entire export process giving the do's and don'ts especially during this crucial period where people must not be loitering from place to place in a helpless state where some authorities are rudely discouraging them, rather than encourage them to safely complete their task. After all, only a few companies are even able to do this with the lack of public transport.

"We have recognised the need, and cautioned the government to ensure that we manage our port facilities well, that the Colombo Port operates at the highest level of efficiency, without congestion and delays, and offer an acceptable level of service to shipping lines and importers and exporters," de Mel said, adding that exporters have advised that port rent should not be charged during the curfew period.

The Ministry of Ports and Shipping has understood this and has issued a circular to correct this matter. But importers must be encouraged and urged to clear their consignments without delay, as it is important that we maintain a healthy throughput with a reasonable turnaround of empty containers bringing in imports to be made available for exports without having any shortage of empty containers for export.

This is key to ensure the confidence of shipping lines that are facing many difficulties and challenges at present with escalating costs as well as service interruptions at international terminals.The Sri Lanka Ports Authority has identified this and taken prompt remedial action.

"I commend the work of all employees of the three terminals who have performed exceptionally well during this crisis period giving the port user community their fullest support.

"The trade has been in constant dialogue with the other key government institutions such as the Customs, the BOI and the Department of Commerce where senior offices have stepped up to the needs of the hour, even to the extent of improvising and creating, 'on the spot' solutions to ease the pressure on the users, most of whom have been operating with skeleton staff," de Mel said.

Sri Lanka has done well so far being rated high when compared to other countries in managing the spread of the dreaded virus.

"This itself is a huge advantage for the country and the confidence of our buyers that we could be up and running as soon as we know that the number of new patients identified becomes zero for a significant time where the country could be cleared as a safe zone and we manage our entry points under strict monitoring and compulsory quarantine guidelines for all who enter the country once the airport and the ports are opened for disembarkation.

"I salute the President, the Prime Minister and the task force heads who have been leading from the front and not forgetting the medical staff and the security personnel from the Tri forces whose dedicated commitment, risking their own lives have assured us of our safety," de Mel said.

On the depreciation of the rupee he said, "Though we might have a temporary gain by the increase of export income, I don't think we will benefit much in the long run. Let's not forget the other factors that will also change like our costs of manufacturing going up due to the hit on our imports and cost of living."I think the game changer is going to be how fast we are able to come out of this pandemic and efficiently market ourselves to be a safe supplier of goods and services to the world market again. We can't afford to have political instability, and irrational or hasty decisions taken to dole out any goodies during the election period.

"We must seriously look into the issues faced by manufacturers to ensure that jobs are retained and work goes on in full throttle while carrying out a global campaign at least among our frequent buyers to assess the level of recession and how we could either take advantage of increasing our market share or securing new markets that have been opened for us as a result of our competitors not being able to bounce back as fast as us," de Mel said.

Meanwhile, the Board of Investment (BOI) has requested for curfew passes to enable factories to resume production gradually.